What I Saw:
In Photographs: Myanmar

What I Was Listening To:
PLAYLIST: Burning in Burma

Normally, I have to think long and hard, and consider too many factors before I can commit to a travel invitation. But I was presented with the opportunity to go to Myanmar, and I could not pass up the chance. I believe my exact words were, “Fuck it, let’s go.”

I suppose I was so ready to go on this trip because, more than the thrill and the wanderlust, I have been yearning for that overwhelming feeling of something greater than myself, which, I’ve realized on the different degrees of my solo excursions, I get from traveling.

First, the journey. If you’ve never been there, here is an idea: A shoestring budget, limited time and unpredictable airline circumstances will create you a monster of an Amazing Race experience, if you’d like to imagine being on the show.

We flew from Manila at 7 AM, stopped for a 5 hours layover at Kuala Lumpur, and then landed at Yangon at around 7 PM (Myanmar time). Air Asia had rescheduled our flights to a later time than we had anticipated, so we had no choice but to deal with very little wiggle room. It took us literally 10 minutes to zip through all the other tired passengers on our flight, charm our way through Immigration, and have money changed to Kyat (the local currency). Why the rush? Well, we had to catch a sleeper bus, which was leaving at 8 PM, which was at a bus station not so far away, but with Yangon rush hour traffic, we were kind of pushing it. I may have bitten off a quarter of a nail from panic. We made no arrangements to lodge in Yangon.

Although, we did come really prepared; we booked ourselves a taxi and driver to transition us seamlessly from the airport to the bus terminal upon arrival, and then to take us around again when we came back from Bagan on the last day. Thaung took such good care of us. He worried about us making the bus to Bagan. On our last day, he showed us around the city, took us to the Shwedagon Pagoda, and brought us to lunch at an authentic Burmese hole-in-the-wall. 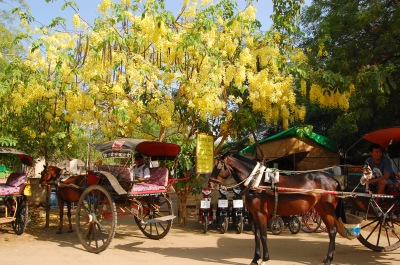 After wading through all foliage of cars, people, puddles, and mud, clearly the bus hadn’t left us. We sat ourselves in our surprisingly comfortable, fully-reclining seats, and woke up in Bagan at 5 AM, the next morning. If you’ve kept up, and are doing the math, that was 24 hours of being en route, alone.

Two full days of temple running in Bagan, and put the whole process in reverse (and barely 45 minutes, amidst a very complicated system of connecting flights at the KL airport), and that was the whole, arduous, exhausting, heart-pounding, trip.

Myanmar was beautiful. I loved it all —
its flavors, odors, and colors;
the heat of its air, and the chill of its people;
the abundance of culture, and the absence of noise;
the humility of its monks, and the pride of its pagodas.
But of the many things that this trip was to me, it was mostly — 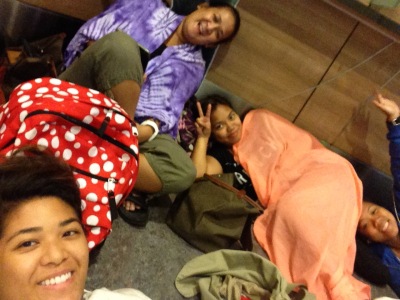 An Exercise in Detachment
For the cosmopolitan Manileña, it is difficult to comprehend having to go 24 hours without showering, or brushing your teeth (which should be simple and quick enough to do). But we really just did not have enough time to get any of these done. A superficial concern, I know. But consider the very image-conscious/-driven industry which sustains my livelihood, where I drown in messages of vanity and gloss. I’ve been a slave to it long enough to say that “looking cute” is an imposed priority.

But we were running through airports, unbrushed, unshowered, uncombed. And it was great.

I observed the Buddhist monks. They live on nothing much but their robes and prayers. While they roam the city for food, I live a life of numbing excess — I have more of everything than I know what to do with. Has it made me happy? Is there joy in suffocation?

When traveling, you are afforded the very special privilege of being self-reflective without looking at a mirror. You are alone with yourself, at your own devices, to face your own demons. You have not the time nor the facilities to care about appearances. And running through airports, riding through dust, falling from a bike on a dirt road — It was such a welcome change, and for someone who is commencing the next chapter of her journey towards self-discovery, this concern in valid. I can drop the facade; strip off the masks of makeup, gloss, smoke, mirrors, and all my guards.

That brings me to a question of authenticity. Who am I, underneath it all? My passions (or are they past times?) dwell relatively on the surface. But, what drives me? What do I live for? When all the noise shuts off, what does my heart ache for? What’s it going to take for me to fight for it? What is my truth? I am determined and excited to find out who I will discover within myself after I’ve rid myself of all my forged, but ultimately unnecessary attachments.

An Exercise in Patience
One of the most notable things that I took away from Myanmar is: as beautiful as it is, it is HOT. It is sweltering. We went to tour Bagan on bicycles, and the wind blowing against our faces felt like we were standing in front of a fire. We also noticed that the cars that drove past us, all had their windows rolled down. Outside of the hotels, there is no air conditioning. And there were no electric fans anywhere in the middle of the desert. I asked our cab driver, Theung, why this was so. All he did was shrug and say, “There is no need for it,” which was both much less and much more of a response than I expected. It was such a simple, ready answer, but it bore the full weight of all the “problems” that really don’t need to be.

Not that I had any right to complain; I come from the tropics. I learned a long time ago that complaining will get you nowhere. Especially if it is the heat that you’re complaining about. You will never hear me complain about the heat. In some ways, Myanmar has it better than Manila, because at least over there, it isn’t humid. But that’s besides the point. What good is complaining going to do?

I will be the first to admit that I am quite impatient. Being that my world is frenetic, I sometimes have no choice but to rush. Alas, instant gratification is an addiction.

In the same vein of Detachment, and having not wont for material possessions, is the value of Patience — accepting situations as they are, and allowing them the time and the space to unfold. So what if it is a little hot? Not everybody has the privilege of adjusting their indoor climate.

Don’t get me wrong: I don’t denounce pro-activity. I do take pride in being able to take the reigns of situations and adjusting them according to my liking and comfort. The point that I mean to drive at is that when situations are uncomfortable, instead of fighting it, take reign over the factors that you do have some control over, let the rest happen naturally, and take a learning away from the experience. 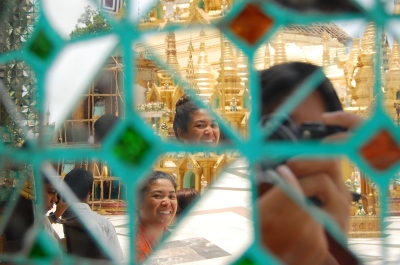 Admittedly, these are difficult pills for me to swallow. Only because it will require such a drastic shift away from who I believe I used to be — my priorities, my beliefs, my daily habits, my world views. Being at a personal crossroad, the constant battle these days is between fighting and free-falling — Which battles will you fight, and which do you walk away from? Which leaps will you jump, and which falls will you take?

The irony is that the absence of literal and figurative mirrors is possibly the most effective catalyst to self-discovery. That begs the question of whether or not who you seem is, in fact, who you are. Is it? The resolution is to perhaps cultivate a mindset that is less concerned about how things seem, and leave room to just let them be. Put the mirror down. Let nature run the show.

Protect the earth while you roam it with ocean-friendly, biodegradable beauty and travel products so natural, you could eat them. Guilt-free beauty in the palm of your hands.

Wagyu x Ribeye, Angus Tomahawk, and Wagyu x Striploin at @nanka_ph - all beautifully charred, sliced to serve, and melts in your mouth. I was fortunate to be sent on assignment to cover this. Article up on @metrodotstyle! Link in bio!
Bye 2019/Hello 2020! It's a bittersweet farewell, as well as a joyous welcoming. So many surprises last year, and enormous ones, too! Serendipitous that I close the 2010s married to BBQ my TLK (True Love's Kiss), when at the beginning of 2019 I had absolutely no idea that I was even going to be engaged? How crazy is that? Unwittingly I realize that there are parts of myself that wanted to retire: Single Abi may have been the most exhausted of them all, after over a decade of dating tragedies. I'm so glad that's how that turned out. Lord. Not a widely known fact but I have a quiet, personal tradition of punctuating every year with a song. Songs are my prayers. It was tough this year, because the year itself was a tough year, and also because the whole holiday season seemed so rushed and I've barely had time to really ruminate. At the end of the day (or the beginning of the day? Or the end of the year?) I came up with my girl Amy Winehouse's "Tears Dry On Their Own" - a hopeful dedication to closure and maturity. A bittersweet goodbye to the girl I was throughout the last decade or so - she can rest now. 🙏🏽 Which leaves me the task of rediscovering yet another side of myself I'd never before seen. I'm excited to meet you! I'm excited to personify you. Looks like you're gonna be a real cunt. Calmer maybe. But cuntier. Let's rock n' roll!
A rare #OOTD - I only ever really oblige when I'm in something by @manilacollectible. In this case, a chambray wide-leg pant with Maranao okir accent embroidery. I will live in these in 2020, for I really can no longer be bothered to wear anything else but comfortable.